Point to Point Transfers in Johannesburg

Johannesburg – the gateway to Africa

As home to the richest square mile in Africa, Sandton Square, Johannesburg has earned its nickname, Jozi – which means ‘City of Gold’ – for good reason. This vibrant first-class African city can be something of a welcome shock to those who have the stereotype of a run-down, non-functioning African city in mind. Not only is the city pretty much cosmopolitan – but it functions in all the ways you’d hope it could.

Johannesburg and surrounds are home to some of the swankiest shopping malls not only in Africa, but south of the equator. The streets and highways are tarred and well maintained, road signage is good, and cellphone reception and WiFi connectivity are great, with the latest 5G technology being piloted in certain suburbs. Although there are eleven official languages, the default is English, which is widely understood and spoken. 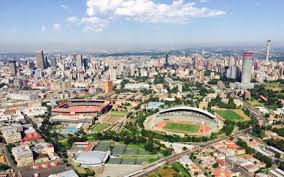 Even if you’re just passing by Johannesburg for a weekend, there is plenty to pack in! Possibly one of the only serious drawbacks in this modern, high-rise city is a lack of reliable, safe public transport that provides the kind of interconnectivity of a mass rapid transport system underground. While there is a public rail and bus system, and the Gautrain from the airport to major stops in Johannesburg is great, the system itself can be cumbersome to navigate as the various stops do not criss-cross the city very well.

The good news is, the private Uber-style taxi vendors are efficient and reliable. There are numerous private cab offerings to choose from.

Transferring between terminals at OR Tambo

Prior to landing at OR Tambo, you may be anxious about your Johannesburg Airport transfer from domestic to international. You may be flying to Joburg from Cape Town, Durban or any of the other local airports on your way to a myriad international stops.

If you’re worried about how long this will take, fear not. A Johannesburg Airport transfer from domestic to international will routinely take you between forty-five minutes and one hour and fifteen minutes. Rarely will it take as long as two hours, and that would only be in peak morning hours.

A Johannesburg Airport transfer from domestic to international is not as time-consuming as many tourists assume, due to the big scale of OR Tambo itself. There are six terminals, all of which are in the same building. You won’t ever have to leave the airport building itself, although you will have to move between floors. If lost or confused, always head to the ably staffed and centrally located information kiosks. Here, you’ll find quick and pointed direction.

You will of course have to check in again at your international check-in counter after disembarking at local arrivals. However, in quite a few cases, you’ll be able to book your luggage right through from your local departure destination to your final destination when making a Johannesburg Airport transfer from domestic to international. This is airline and route dependent – always check if you can book your bags straight through when checking in to your local flight first. Immigration departure is fast and efficient – just make sure to have your documents ready.

Should you wish to get yourself around Johannesburg City, it is possible to do so. Arranging car rental at Johannesburg Airport is no hardship at all. There are ten car rental companies situated at the airport. You can book your vehicle directly when landing, or reserve it with a deposit before the time. Try to book before the time in peak holiday periods such as March and Aprilm and December and January.

Summary of must-see sights in Johannesburg

Some offer shuttle services for individuals or groups, while others, such as Avis, offer chauffeur-driven point to point transfers in Johannesburg. All of the latter point to point transfers in Johannesburg are charged per vehicle, not per passenger, and per number of hours required for your itinerary. Chauffeurs are English speaking but should you need a tour guide speaking another language, once can be arranged for you.

A few must-see Joburg spots include:

Transfer to Sun City from Johannesburg

The world-famous Sun City is such a spectacular destination that many Joburg tourists often head straight to this nearby all-inclusive destination. Whether you’re seeking superior shopping, entertainment (theme parks, food adventures, theatre and more), sporting activities, extreme adventure, casino gaming, safaris or a man-made lagoon with waves, Sun City literally has it all. The best news is, a transfer from Sun City to Johannesburg and back is quick and fuss-free.

Should you choose a road transfer from Sun City to Johannesburg, it will take you about three hours in average traffic. There are service providers dedicated to this route. Airport Shuttle SA is one such provider but there are numerous reliable options to shuttle you directly from OR Tambo or anywhere in Joburg to Sun City.

If you’re hopping on a shuttle at the airport, make sure to allow enough time to disembark through arrivals so you don’t miss your scheduled shuttle departure. Once at Sun City, you do not require a shuttle as the resort itself makes shuttles available around the clock.